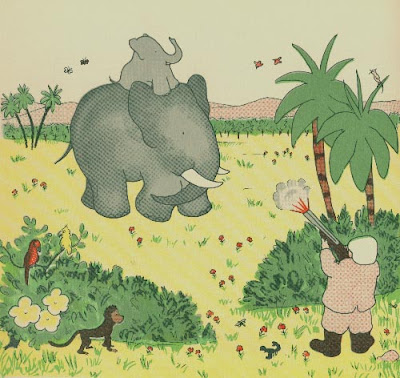 People occasionally contact me when they're exasperated with the city, but a gentleman I spoke with yesterday was fuming at the newspaper. A column on the front page of the sports section glorified shooting a lioness on an African Safari. If that didn't offend this guy enough, the hunter planned to return to Africa, to shoot an elephant. The hunter's only concern was that killing deer in Pennsylvania just wouldn't do it for him any longer. He says that in Africa, if your check book is big enough, you can kill anything. Hope that doesn't include bloggers, but back to the upset newspaper reader. I think he can accept the misguided hunter, but he wonders what processed the columnist and his editor. I should mention that the paper included a photograph of the Great White Hunter and the dead lioness. Perhaps to the reporter, who covers both sports and outdoors, bagging a lion hunter is a bigger catch than the usual teenage boy shoots first deer story. Anyway, for us Babar fans, it was offensive.
reprinted from molovinsky on allentown
Posted by michael molovinsky at 7:23 AM