Obama Preaches To The Choir In Philadelphia 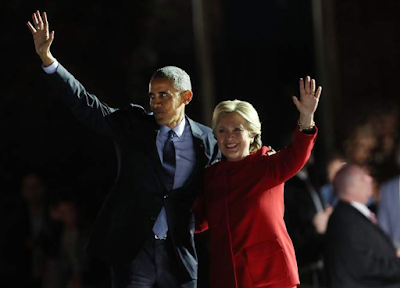 On  Sunday morning, a black power broker from Philadelphia stated that Pat Toomey has done nothing for the black community in Philadelphia. A journalist present, explained that Toomey has been the leading conservative Republican for gun control, while shootings have taken the lives of almost three hundred  blacks a year in the City of Brotherly Love. The black broker replied,  but Toomey hasn't come to their churches, and spoken directly to them.

President Obama came Monday night, and not only spoke, but preached to the choir.  His sermon even had a well rehearsed amen in the background. His supporters claim that he is a legal scholar, but all I heard was a  politician, promoting another one. Obama started out at the Democrat convention twelve years ago, as an eloquent speaker promising hope and change.  Last night, he ended his career by wrongly claiming that United States is more respected now than before,  and that its workers are better off.  Although, he certainly remains as eloquent of a speaker as ever, and he may still even inspire hope,  he certainly brought no change.  In addition to Hillary, his sermon gifted McGinty, who besides being one of ten children, appears to have no qualifications.

There will be free rides in Philly today, just call Uber, and say that you're a cog in the vote machine. Additionally, a settlement was forced upon the SEPTA board, to maximize the turnout.  Last night, Bon Jovi and Bruce Springsteen weren't the only showmen in Philadelphia.
Posted by michael molovinsky at 8:29 AM